On this week’s episode of THAT’S AWSM!, Mohawk actor Kaniehtiio Horn will introduce Owen, a 18 year old Cree, to the world of K-9 crime scene investigations. Together they meet a police officer with the K-9 Unit of Montreal, along with his adorable partner, Gibbs.  After learning a bit about how police dogs are trained, they go on a real hunt through the woods, trying to track down Darcy’s stinky socks!  The adventure continues as they try to beat the law of gravity…. Indoor skydiving is a completely unique experience – no plane, no parachute, no jumping – just their bodies and a strong cushion of air. This adrenaline-fueled activity will make them feel like flying superheroes!

The things we do to make TV magic happen! haha 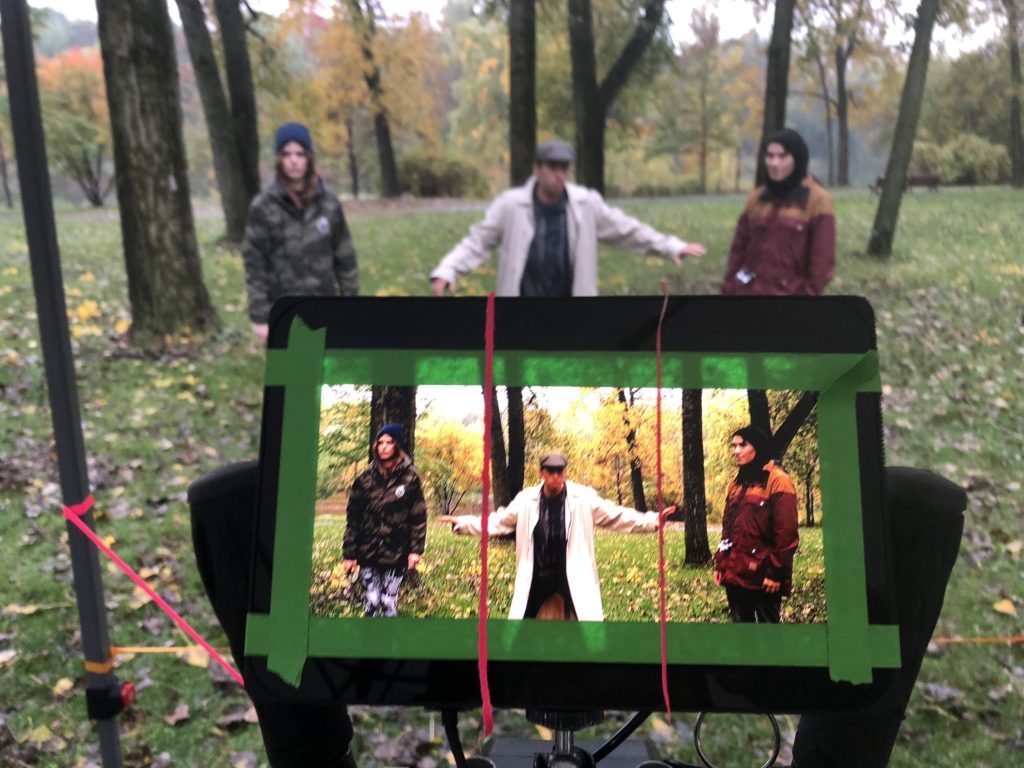 That was so much fun, loved seeing how it worked out in the end with the colors and everything! You guys were awesome!! Loved Darcy’s poses! 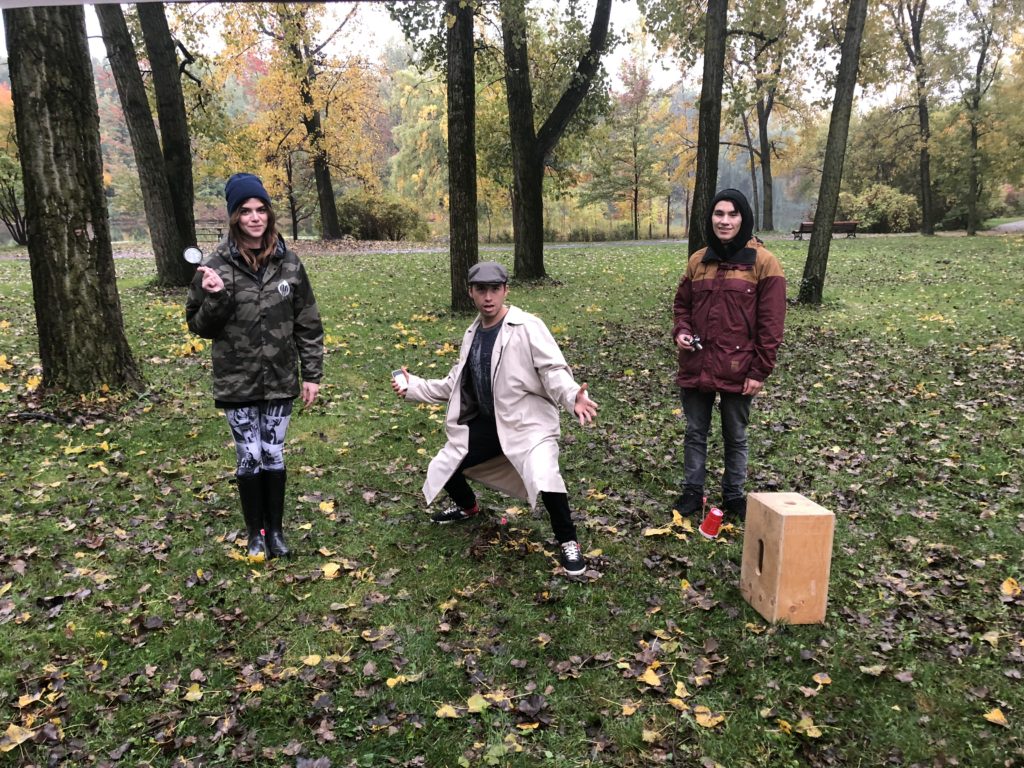 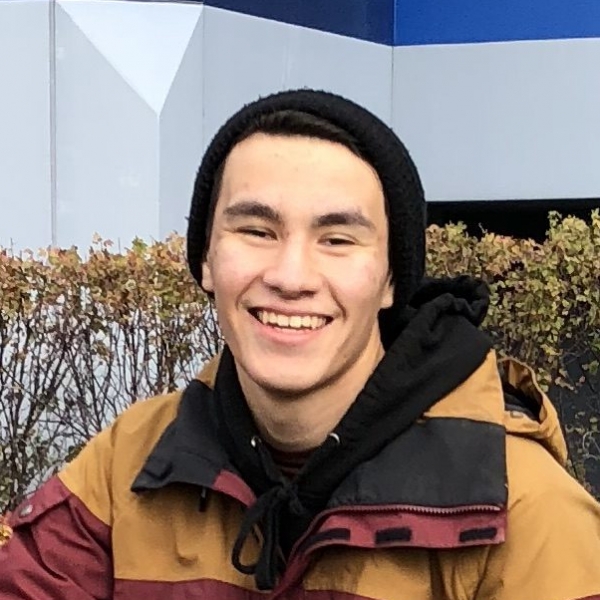 Yea, it was great! The whole episode was a lot of fun to make Love my mini binoculars!!

My favorite part of my interview was watching our sound guy try to warm up lol!

Don’t try that at home kids
Only professional sound techs can master that haha!

That dog was the cutest! I wish I could bring him home! 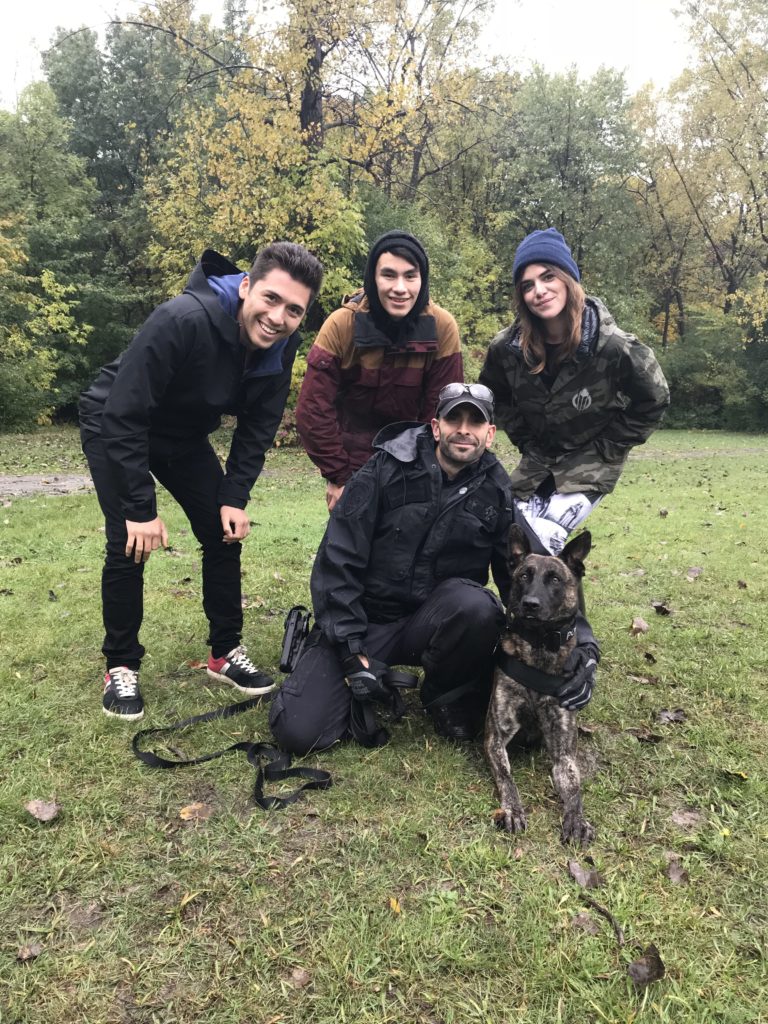 We all loved that dog! Still can’t believe how good he was at posing! Way better than we were, how long did it take to get everyone looking straight at the camera 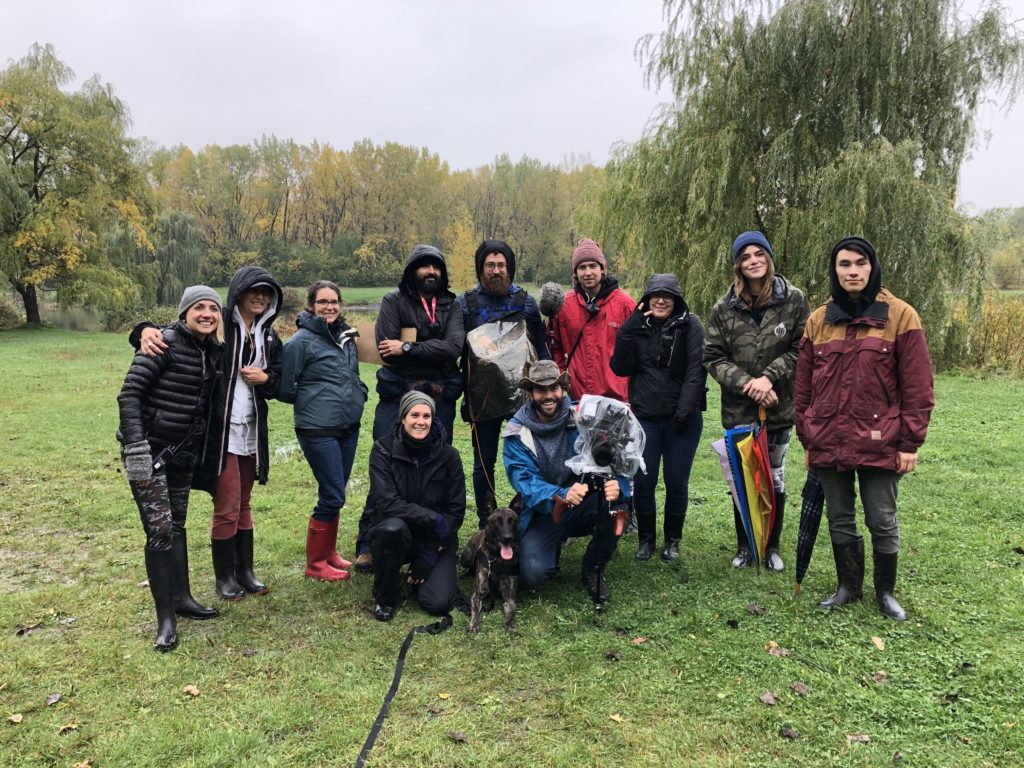 Looking snazzy in those outfits!! 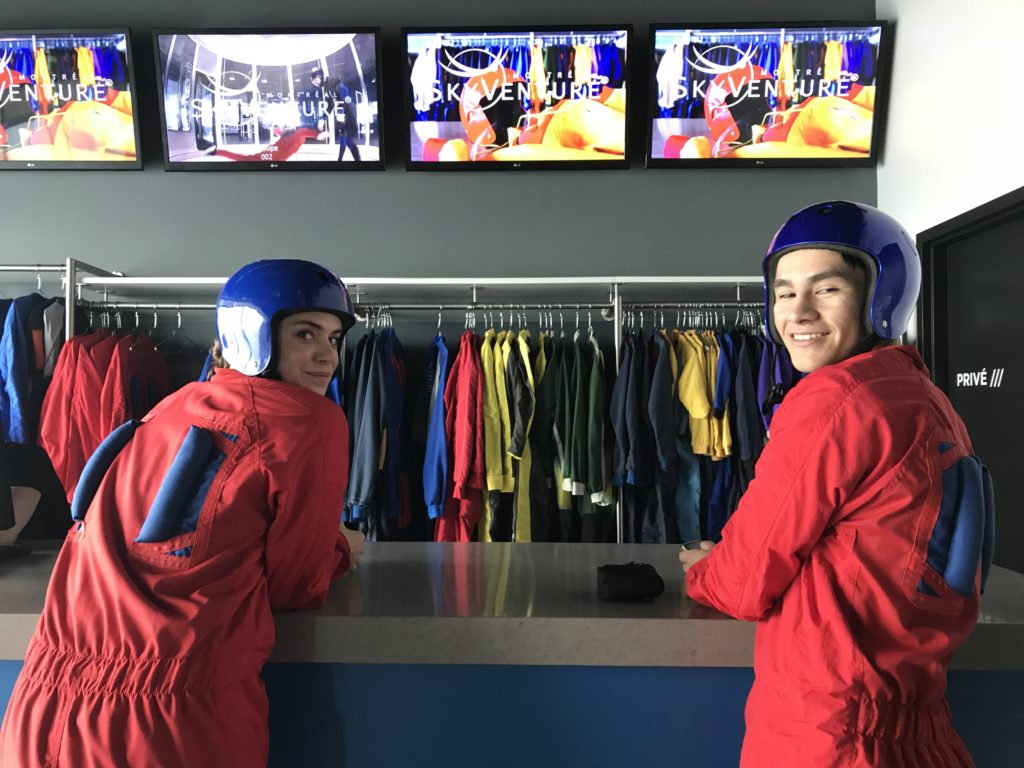 Check out our director testing out the netting. So scary! Once you get in you realize its not so bad though.

We looked so ridiculous with our eye goggles 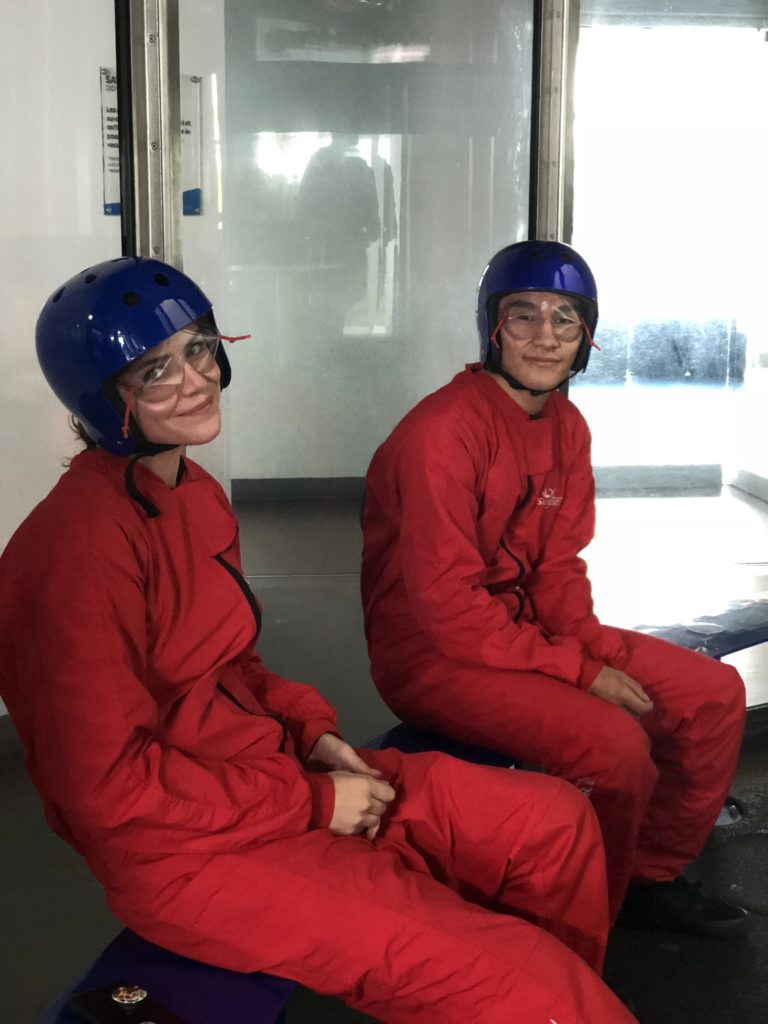 Yea those goggles! But I love how we’re pretty much always matching! 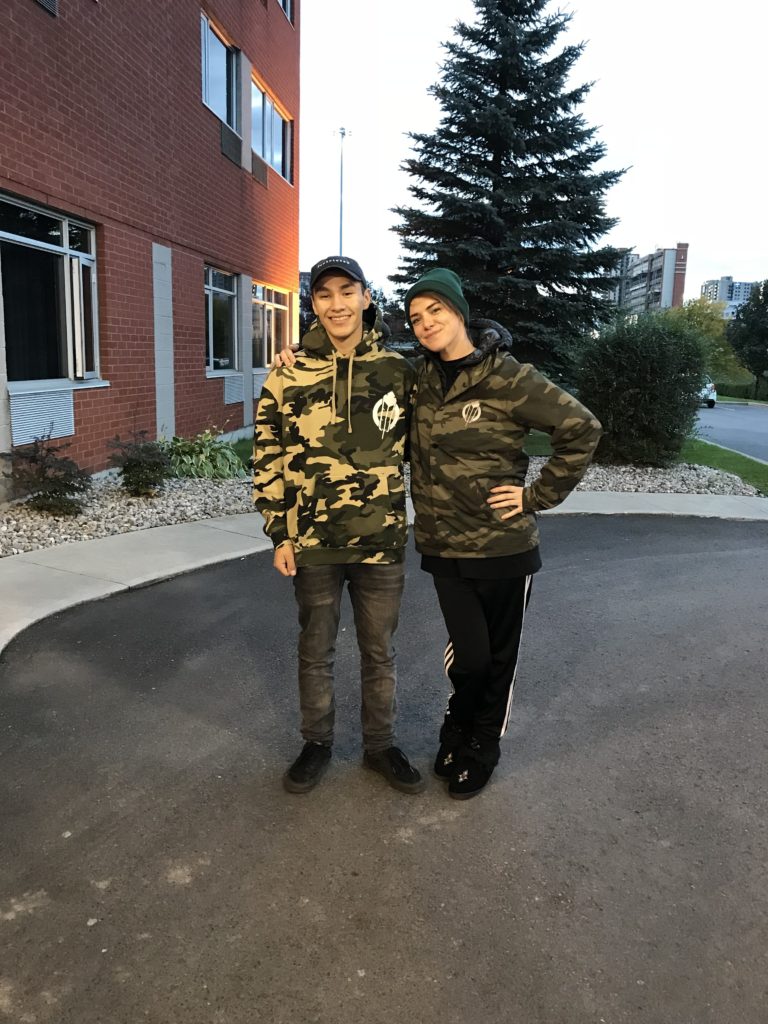 And that was a wrap on our first season! 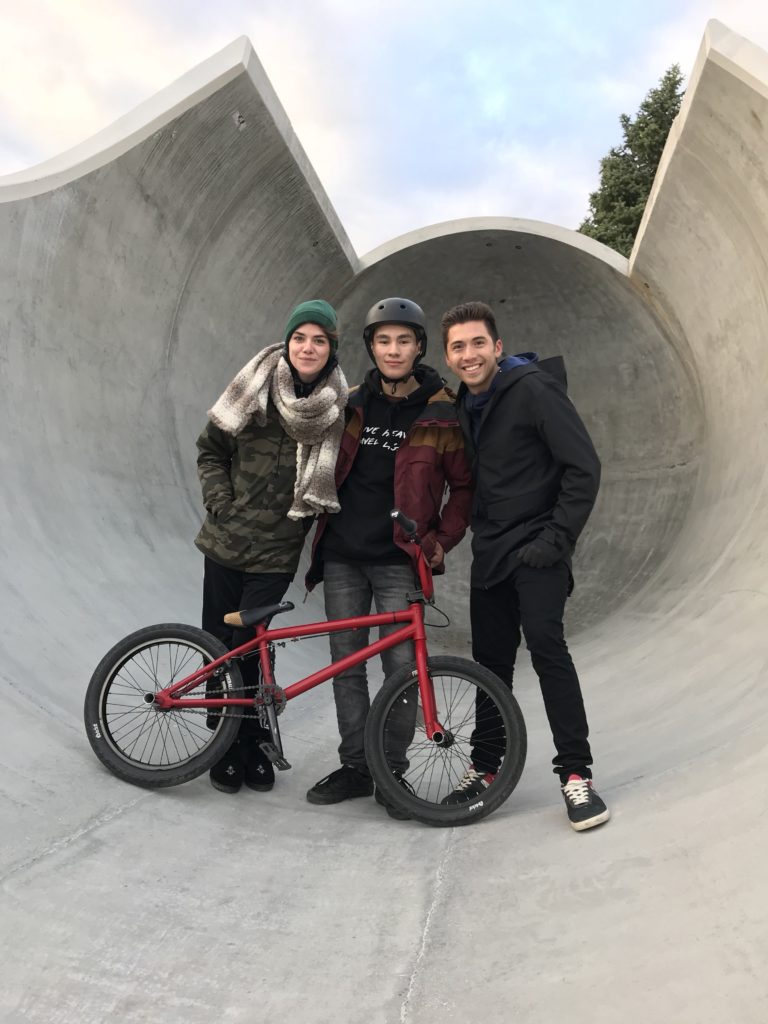 Indoor skydiving isn’t just for fun… it’s been used to train people for some serious jobs, including military training! Paratroopers and special forces have used indoor flying to mentally and physically prepare for their difficult, sometimes dangerous jobs… all within a safe, controlled environment!

Tiio and Owen got to feel like flying superheroes in this episode at SkyVenture.

Police dogs, also called K9’s, may look cute, but they also do some very important jobs, like helping out on investigations! Dogs have been used for policing for a long time – even the Ancient Greeks used dogs to search for things and guard their homes. The first breed of K9 dog used was the German Shepherd, but today many different kinds of breeds are used. With a sense of smell over 10,000 times better than a humans, K9’s are an invaluable help on many different kinds of investigations (not to mention VERY adorable!)

Owen is an 18 year old Cree youth originally from Wabowden, MB. A huge BMX enthusiast, Owen dreams of becoming a professional BMXer and using that as an opportunity to travel the world, but also has a solid plan B – he is saving up for school to learn to become a millwright! Owen loves napping and eating, but is not impressed with unreliable people. He loves keeping up with his social media accounts, edits his own very cool videos, and collects BMX bikes – he has 3 already! His proudest moment so far is when he got sponsored by his local bike shop.

Kaniehtiio Horn is a CSA-nominated actor who has been in films like The Trotsky, Leslie, My Name is Evil, and The Wild Hunt, as well at TV shows including 18 to Life, Letterkenny, and Hemlock Grove. She’s even voiced characters in well-known video games, including the mother of the main character in Assassin’s Creed 3. They liked her so much, they named the character after her! Tiio is a huge fan of true crime and anything related to detective work, and would have been a detective if she hadn’t become an actor. She loves her friends and family, but also enjoys spending time alone