In this episode of That’s AWSM! we have drafted 15-year-old Mohawk sports enthusiast Kait and one of Canada’s fiercest Olympic Ice-Hockey champions, Caroline Ouellette!! They will be embarking on an adventure of exponential proportions, but first Kait gets the opportunity to hit the ice with Coach Ouellette and the Stingers, the women’s hockey team at Concordia, where there is almost never a dull moment. In today’s activity, we are taking leg day to a whole new level, as Caroline and Kait face their greatest challenge yet… VIA- FERRATA!

So great to meet you Caroline! It was really great to learn about all the things you’ve accomplished.

You too Kait! By the way, nice photo! Darcy were you asking the crew for help with that map? You gotta learn how to read maps on your own! 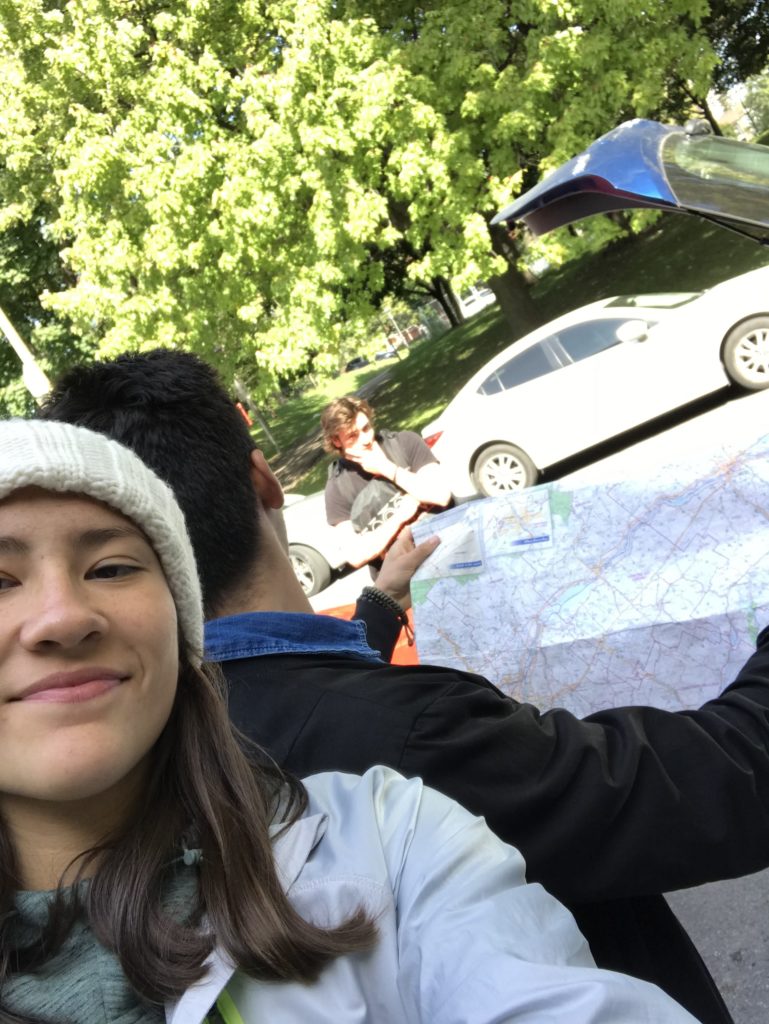 I mean…I tried…he didn’t seem to know how to read a map either! He just walked away and left me to figure it out haha. 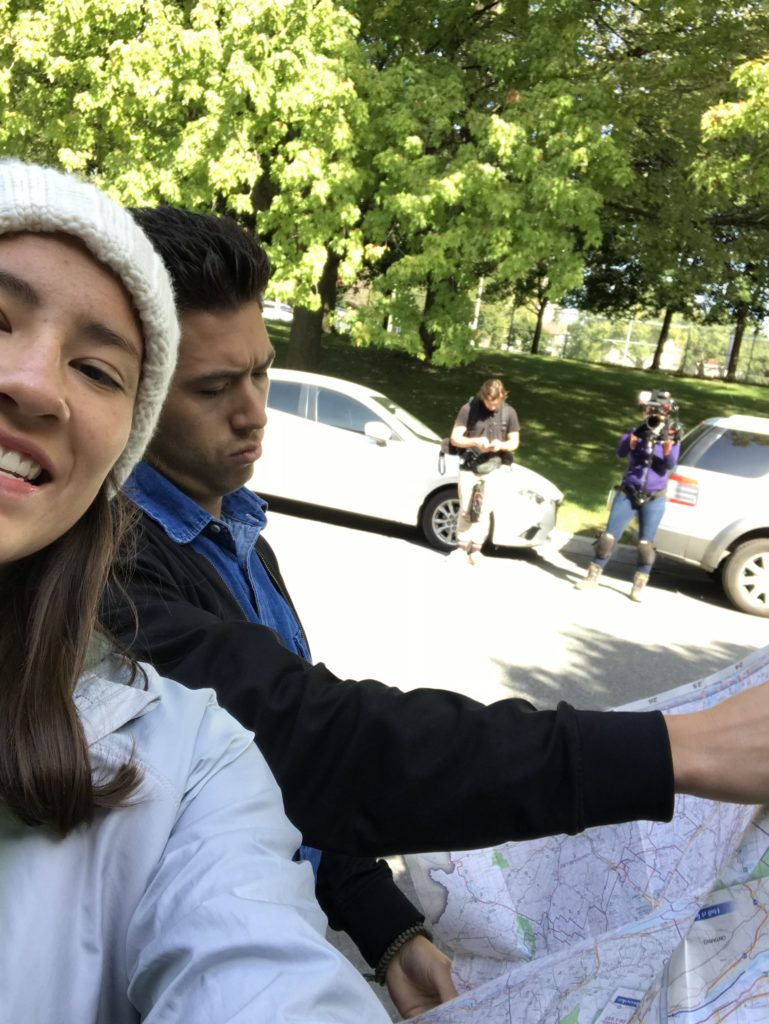 I’m so happy that baby Lyv really trusted the crew during this take! She was really comfortable being passed back and forth! 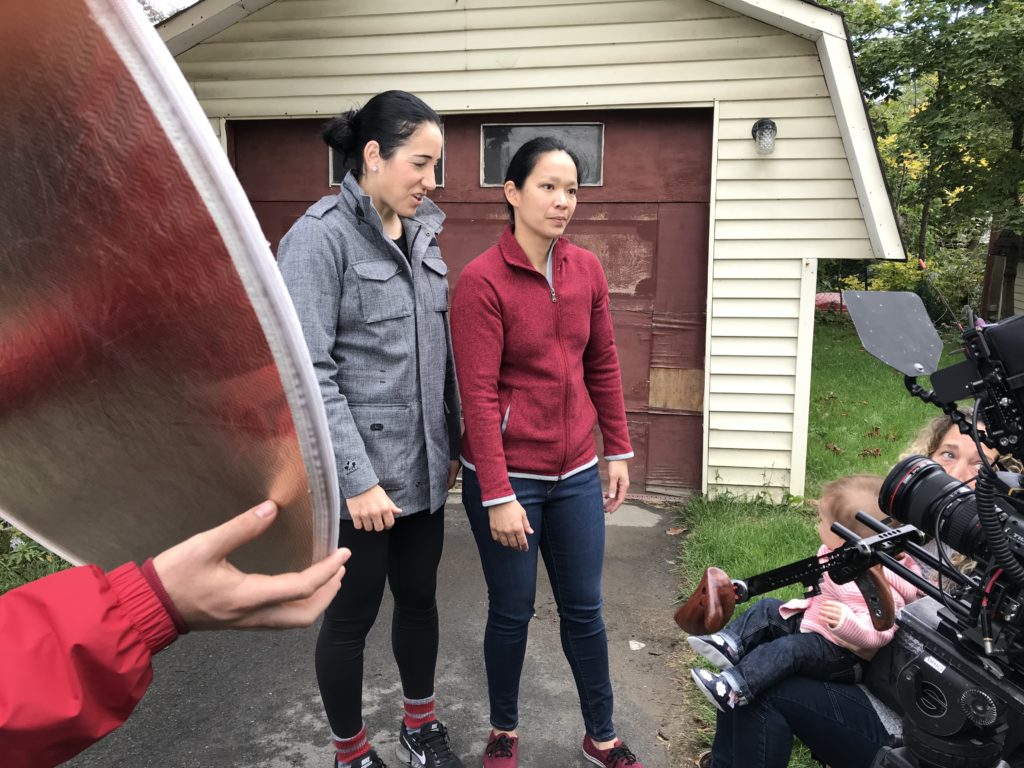 Good thing Julie was there to keep her entertained! It’s definitely a group effort to make a tv show! 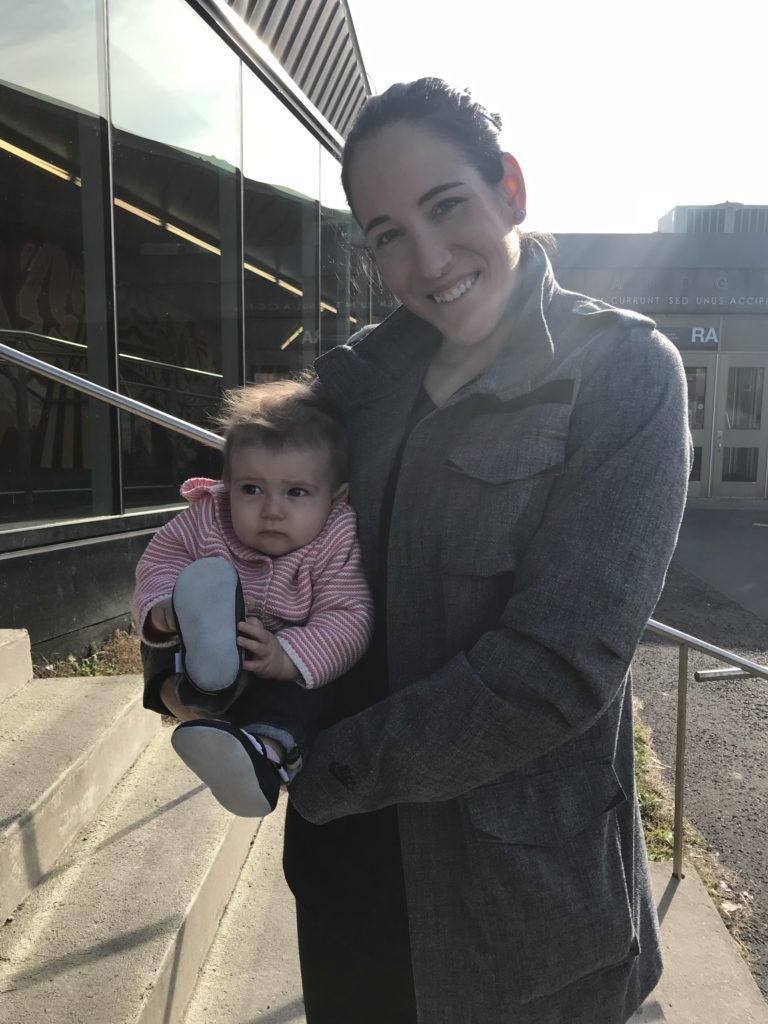 Outside the arena, getting a little sunshine before the practice.

Love this behind the scenes footage of us. Good thing none of the crew fell on that ice!

Loved how enthusiastic our instructor was, he was so passionate about wilderness and mountains! 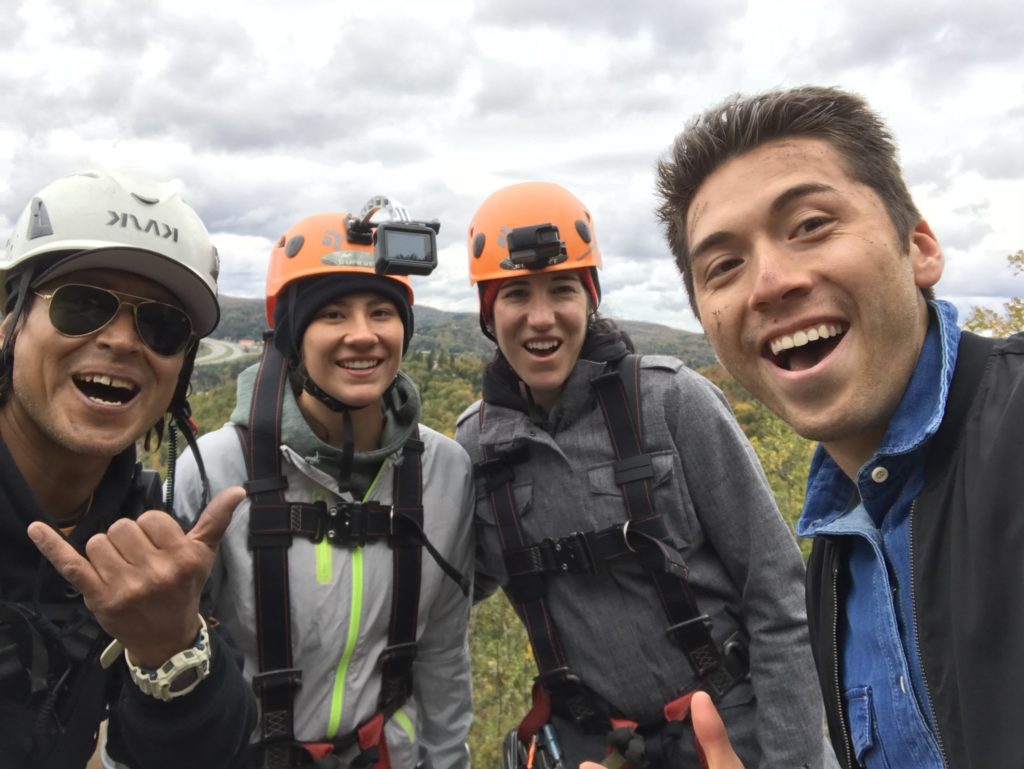 That instructor was so fast!

It was so much fun ziplining with you Kait. The colors were so beautiful! I can’t wait to get back in nature like that. 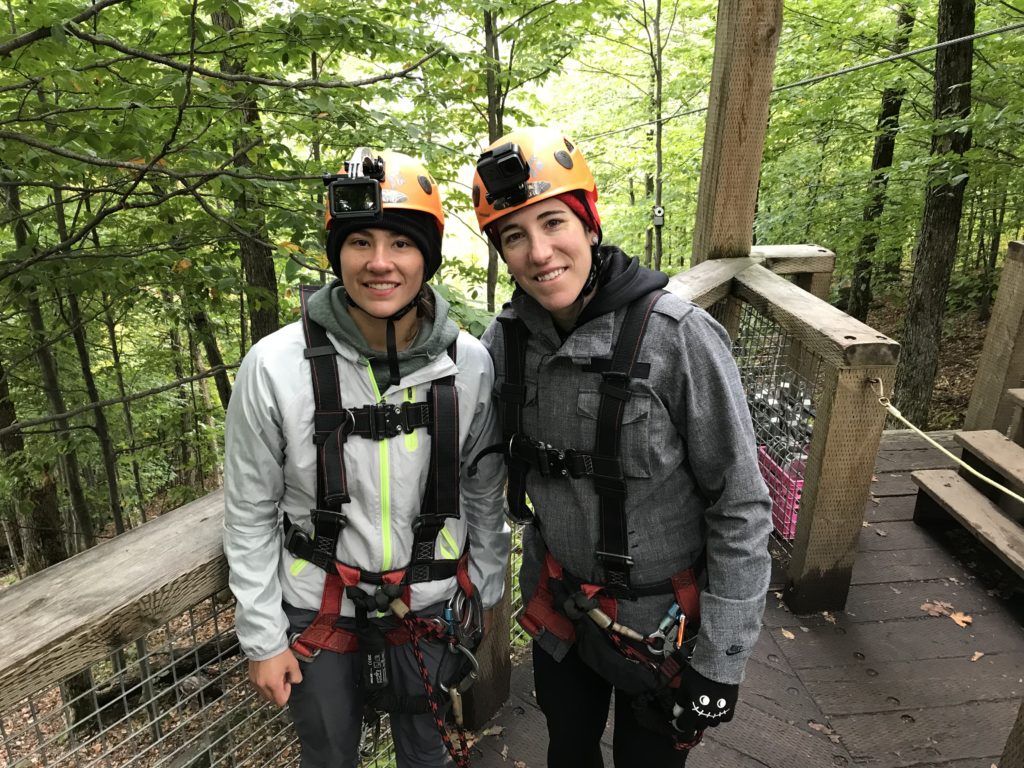 Same for me Caroline, so much fun! And thanks for showing us your gold medal! What an awesome day! 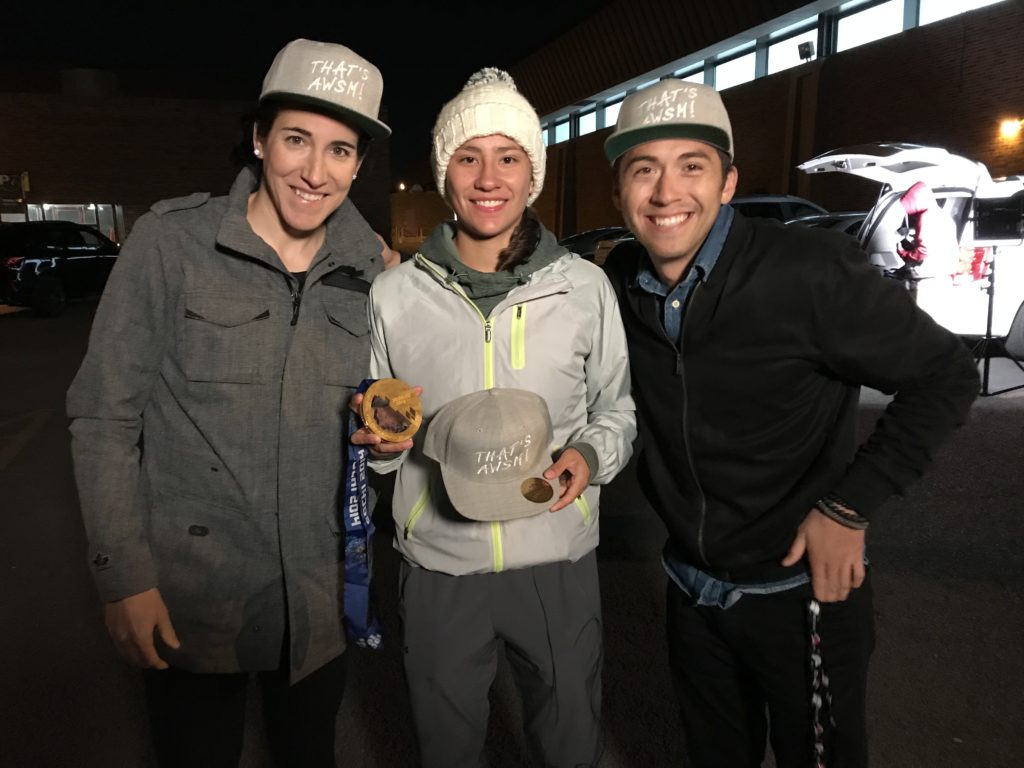 Via Ferrata – which means “iron path” in Italian – is a physically demanding outdoor challenge which is an exhilarating mix of hiking a rock climbing. Participants attempt to climb mountains and rock faces using a pre-existing route of metal bars and wires. Though challenging, participants are often rewarded by incredible views from very hard to reach spots!  Via Ferrata has existed for a long time in many different forms, but something cool about their history is that during World War I, Via Ferratas were constructed and used in the Dolomite Mountain region of Italy to move army troops around with their gear and weapons.

Kait & Caroline got to try out Via Ferrata at Tyroparc

Ice Hockey is a Canadian-born sport; however, its exact origins have long  been debated by historians and hockey fanatics. While hockey definitely has its roots in the 1800’s, at least three spots in Canada claim that the sport originated in their town: Windsor, NS, Halifax-Dartmouth, NS and Montreal, QC all lay claim to the honour!  Despite the debates, the most important thing to take away is that in the early-days of Hockey, a frozen patty of cow poop was used as a puck! Now that’s AWSM eh?

In this episode we’ll hit the ice with the Stingers, Concordia’s women’s hockey team!

Kait is a 15-year-old Mohawk and sports fanatic from Six Nations of the Grand River Territory who plays softball, hockey, and rugby – to name a few. She aspires to one day play softball for Team Canada in the Olympics, and if that doesn’t pan out, no worries, because this gal has a plan B – she plans to join the military and eventually become a police officer! Perhaps the only thing more impressive than Kait’s sports skills is her chewed-gum collection… Yes, that’s right – Kait has a chewed gum collection that is almost the size of her head! Now that’s the result of hard work and dedication!

PassionCoaching the next generation of female hockey players

Caroline Ouellette is a Canadian Olympic Ice-Hockey superstar, with an incredible four gold medals to her name, including one from the 2014 Olympics in Sochi when she was Team Captain. Caroline has since retired from playing, but now spends her time as Skills Coach with the Montreal women’s hockey team, Les Canadiennes, and as Assistant Coach for the Concordia Women’s Hockey Team and the Canadian Women’s National Team. She has also recently taken on her most challenging role to date – caring for her daughter Liv! Caroline is a total foodie and loves to cook, especially with the help of her baby – together they make a mean shrimp pasta!